Abstract: This Audio applicaTIon note idenTIfies and describes the key elements in designing a driver for a Piezoelectric Transducer (PZT). The relaTIonship between source impedance and sound pressure level is measured, single-ended (S / E) and bridge-TIed load ( BTL) driving schemes are compared and the input impedance of a PZT is characterized.
Audible Piezoelectric Transducers (PZTs) are often used as warning devices or alarms. Manufacturers of piezo transducers publish curves and specifications concerning their respective devices. However, there are a few important questions that cannot be answered directly from their data sheets.

What is the effect of source impedance versus sound pressure when driving an audible PZT? This has a direct effect on the peak capacity of a power supply that is used for driving the PZT.

Is there any detectable sound pressure difference when driving an audible PZT single-ended versus bipolar, with the same peak to peak amplitude? This can impact drive circuit complexity.

What does the impedance of a PZT look like? This can affect peak power supply capacity as well as filtering requirements. 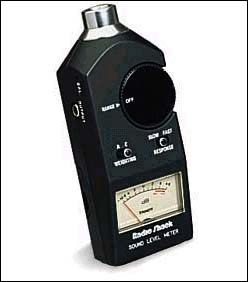 Test Setup: The test setup for testing sound pressure is shown in Figure 5. A box made of processed organic composite with sound-deadening qualities was lined with "dimpled" polyurethane foam to create a psuedo-anechoic chamber. The Radio Shack sound-level meter was placed outside of the chamber with the meter's microphone inserted into the chamber through a hole in the back of the chamber. An L-shaped cardboard stand was constructed, in which the PZT under test could be attached. This allowed for precise positioning of the PZT from the meter's microphone.

Evaluation of Data-PZT ImpedanceThe first fact that needed to be established is the impedance of the PZT. From the Mallory specifications it appears as if the PZT is entirely capacitive. A test was conducted on the PT-1240P to investigate how the PZT reacted to a square wave excitation with a known source impedance. Several tests were conducted with different source impedances. The one documented here is shown in Figure 15. The source impedance for this test was 253.5 Î© with a 0V to 5V square wave driving the PZT at its peak sound pressure output frequency of 5.6kHz. Both rising and falling edges were analyzed. Figure 15 shows an expanded view of the rising edge.

Since there is more resolution on the voltage waveform across the PZT, it was used to analyze the time constant formed by the source impedance and the suspected near-pure capacitance of the PZT. Remember the classical complete response formula for a source driving an RC circuit :

Expected peak current for this test should be 5V / 253.5 = 19.72mA. Measured current was 18.5mA which is believable since cable impedance and potential other error sources are not accounted for. From this test and similar test conducted on all PZTs studied, it appears for all practical purposes that the audible PZT impedance is purely capacitive and as such, current and voltage waveforms can be predicted by knowing the driving source voltage and source impedance.

Evaluation of Data-PZT Sound PressureDiscussions with Mallory confirmed that the Mallory specifications for sound pressure versus frequency were conducted using "A weighting" and by driving the PZT under test with a 50 Î© source impedance. To establish a baseline reference each PZT was tested in the Maxim sound pressure test setup (see Figure 5) by driving it with a 50 Î© source impedance. The resultant curves do not exactly match Mallory's curves (see respective data sheets on Mallory website at), which was expected based on the use of a psuedo-anechoic chamber and an average sound-level meter. However, the data curves were close enough to proceed forward with the intent of the experiment. Relative readings are sufficient since the main goal is to establish changes in performance of the PZT under test when conditions of source drive impedance and source drive type (bipolar or single-ended) are varied in the exact same test environment.

An empirical test was conducted to see at what dB (sound pressure) a degradation in loudness of the PZT could be detected. It was concluded that a decrease of any more than 10dB would be a noticeable change in loudness from the PZT. This seemed reasonable , as when referenced to Figure 16 it can be seen that the difference between an anechoic room and a quiet whisper is about 10dB. In integrated circuit design for a PZT driver, source impedance must be specified, since it is a major factor in the design of the output power stage for a PZT driver. The lower the source impedance required the larger the output power device and hence more die area and cost. One of the goals of this investigation was to determine what value of source impedance would be acceptable to drive a variety of PZTs at both 5Vpp and 3Vpp. One important criteria was to ensure that the sound pressure degradation was not more than 10dB.

Is there any detectable sound pressure difference when driving an audible PZT single-ended versus bipolar, with the same peak to peak amplitude? Extensive testing on all three Mallory devices emphatically concluded that there is no measurable difference between driving these devices either with a bipolar or single-ended excitation from 3Vpp to 5Vpp. If other devices are to be considered it should be certain that their rating for Vpp drive is above 10Vpp if they are to be used at 5V single-ended drive in order to prevent mechanical damage to the device due to over-extension of the piezoceramic element.

AcknowledgmentsA special note of thanks to David Kuo, Engineering Intern at Maxim Integrated Products, Tucson Design Center, for his dedication and diligence in helping construct and conduct the experiments required to analyze the PZTs used in this application note.

SCOTECH manufactures a full range of pad mounted distribution transformers, it consists of HV compartment, LV compartment and Transformer compartment, they are compact power system for utility, commercial and industrial applications. the Pad Mounted Transformer can be installed indoor or outdoor and designed to withstand most of the environments. it can also be designed specifically for the solar photovoltaic generator applications.

Primary voltage up to 35KV

Rated power: up to 5MVA